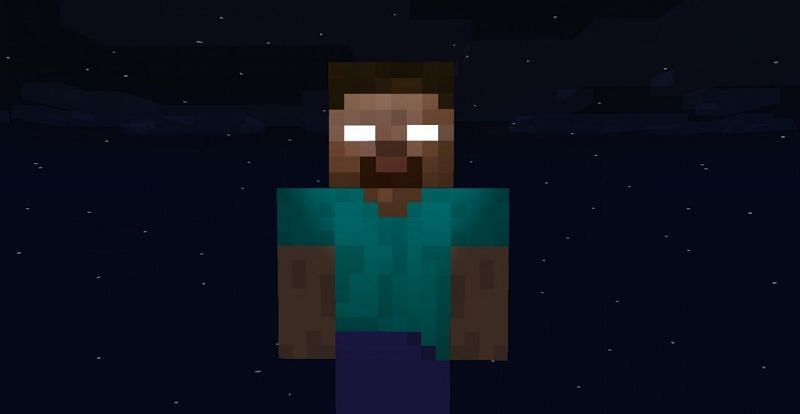 Minecraft is a ten year old sandbox game with a huge player base. Many players have reported seeing unusual entities in the game, including Herobrine. He was said to be the only human living outside of the villagers who were part of the game.

He looks like Steve but with creepy white eyes that glow and can easily be seen from a distance. The name “Herobrine” rose to fame in 2010 after a video went viral in which a player himself met the legend in his world.

Many others say they have also seen Herobrine in their survival worlds. They also shared images from their games. Some images showed Herobrine holding tools like pickaxes, and the community often portrayed Herobrine as a dead miner.

Is Herobrine still in Minecraft?

Herobrine is currently not in Minecraft as it never was in the first place. There is no reference to him in the game’s source code, and no entity has been programmed to act like him. However, to deceive fans, Mojang has released patch notes that mention his name.

Players can only find it if they install community-created mods or add-ons. One of the most famous mods containing Herobrine is The legend of Herobrine. It adds a method for players to spawn Herobrine in the game.

I thought herobrine was removed in the last update …

What did Notch say about the existence of Herobrine?

Markus Alexej Persson, better known as Notch, is a Swedish game designer and video game programmer who created Minecraft. Herobrine would be his dead brother, but that was totally wrong, and in reality, Notch has no brother.

Notch has often been asked if he will ever add Herobrine to Minecraft. He replied that the legend of Herobrine is funny, but that he has no plans to add it to the game.

Herobrine is not real, no. I never had a brother (well, there is a half-brother that I never meet …), and he is not in the game.

Read also : The differences between canon and community traditions of Minecraft Creepypasta Herobrine

Want to stay up to date with the latest Minecraft content? Like our FB page for more news and updates!