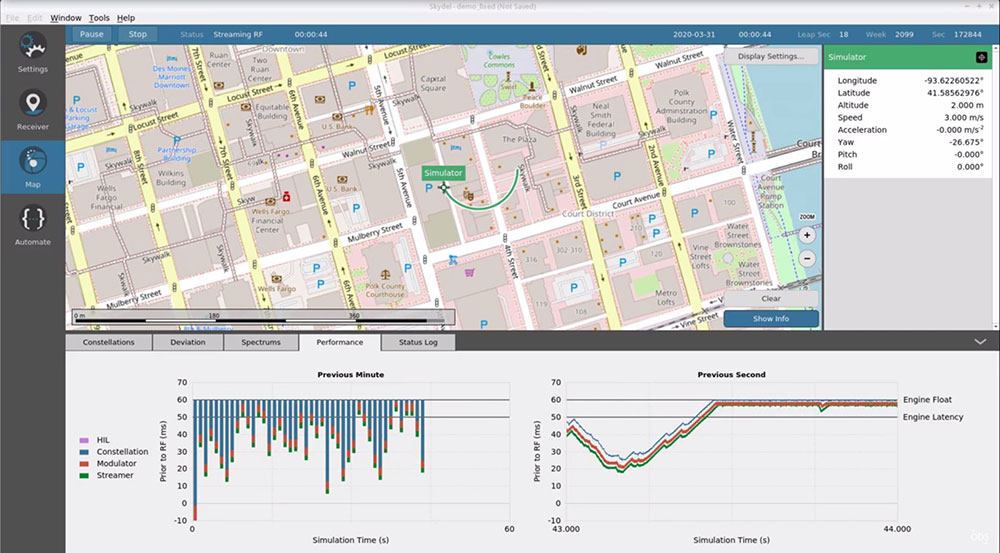 Orolia has announced the launch of its real-time performance capability, which achieves ultra-low latency of five milliseconds. The functionality will be standard on all GNSS simulators powered by Skydel.

“Skydel is known to users for its intuitive nature and its ability to be quickly redeployed for a variety of projects,” said Tim Erbes, director of engineering for Orolia Defense & Security. “Delivering real-time performance with latency as low as five milliseconds further shows that Orolia is a market leader in helping its customers to exceed their expectations. “

The user interface has a sophisticated dashboard displaying real-time performance graphs. The tool allows users to assess simulator performance, interpret data, diagnose inefficiencies, and optimize scenarios on the fly. In a video tutorial, Orolia shows how the simulation engine processes data and how easy it is to read graphs thanks to its precise visualization and indications. When the system reaches its limits, it remains stable and fully operational, preserving the integrity of the simulation.

Erbes said the real-time performance graphics not only inspire confidence in the simulator, but also allow better integration into the test bench.

“For example, instead of just hoping their hardware-in-the-loop setup is working, users can view the data in real time and see that low latency is being maintained,” he said. “This feature provides improved visibility not only into simulation performance, but also the reliability of hardware-in-the-loop integration, resulting in a more robust solution. This is essential when generating complex environments with high dynamic range, interference, spoofing, repetition and alternative PNT sensors.